HomeNews & BlogsBest PracticesAre you paying your robots to sleep on the job?

Are you paying your robots to sleep on the job?

Are you paying your robots to sleep on the job? 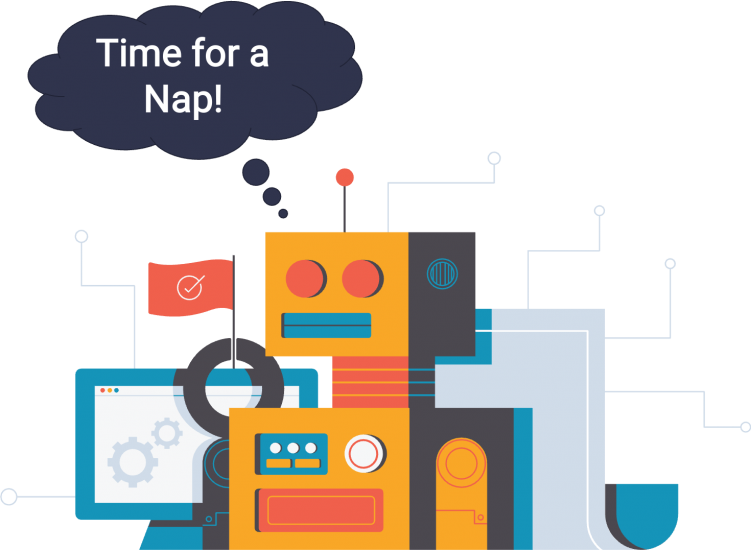 You don’t pay your team to sit around and do nothing so why are organisations paying for digital workers to sleep on the job?

Robotic Process Automation has been an increasingly popular technology enabler over the last 5 years, the promise and value is quite simple. A software program, or digital worker, that is able to carry out repetitive, rule-based activities much quicker than humans and a lot more accurately. It won’t take breaks like a human, nor have sick days and is capable of working 24 hours a day, 7 days a week. Additionally, the business case behind RPA stacks up pretty easily, with RPA coming in at around 80% cheaper than human workers.

Utilisation for RPA is a simple formula taking the total active hours that a digital worker is working then dividing this by the maximum total hours available to a digital worker (which is every hour of every day or 8,760 hours a year) to give you a utilisation rate percentage.

What are businesses views on utilisation rates?

Given that a commonly reported cost for one RPA licence for one year is around $18K AUD (£10k) that cost adds up quite quickly, assuming you have 5 licences and you are one of the more mature organisations with a utilisation rate of 60%, you are spending $36,000 a year for your digital worker to ‘sit’ around and do nothing.

What are the main causes poor utilisation rates?

So why are organisations finding that their digital workers are idle for such long periods of time? The main culprits can be broken down into three buckets:

What can organisations do to change the game to get their digital workers back to work?

Organisations should consider the following when looking to optimise the digital workers utilisation:

Pay as you go model

As RPA technology has evolved so has the business models that are available. Some digital worker providers are helping to relieve the pressures of poor utilisation rates by charging organisations based on how much the digital worker is used rather than a flat fee for the full year. Depending on your organisations processes and setup, this can be a less resource intensive option to optimising the automated processes as the timing of your digital workers doesn’t necessarily need to change.

Speak with an expert

how can we help you?

Contact us today, our team will be happy to assist you.

Trusted by leading businesses across the region

why our customers choose us

Our Focus on Business Value

Value is ultimately a common vision of what success looks like. It’s visibility. It’s savings. It’s user adoption. It’s compliance. It’s best practice. It’s all of that combined. It’s what we define, together, as our shared objective. Value is what we measure, what we strive for.

To help drive value, we work with you in an open and transparent way, we position ourselves alongside you every step of the way actively sharing both the risk and benefits with you – ensuring that we succeed together. That’s what we call partnership.

With over 30 year’s experience across successful process automation transformations across the globe, we have worked with some of the leading companies in a number of industries. We provide invaluable insights on how to ensure you are successful.